In recent months I’ve spent a lot less time in my kitchen and a lot more time outside, relishing warm water surfs and the long, sunshine filled beach days of a spectacular Cornish summer. The oven has barely been on, my cook books haven’t been touched and smoothie bowls have migrated from morning to evening fare.

In the last few days though, with Autumn most definitely in the air, as the wind whips around the windows, and the sky is swathed in thick grey, I’ve barely left the warmth of the kitchen. I’ve been drawn to the familiar cosy sounds of a bubbling kettle, the sizzle of olive oil in a heavy pan, the clatter of stacked plates. As the weather cools and the nights draw in, I feel called back to the calm, focussed, creativity of cooking and the nourishing warmth of a slow cooked meal. 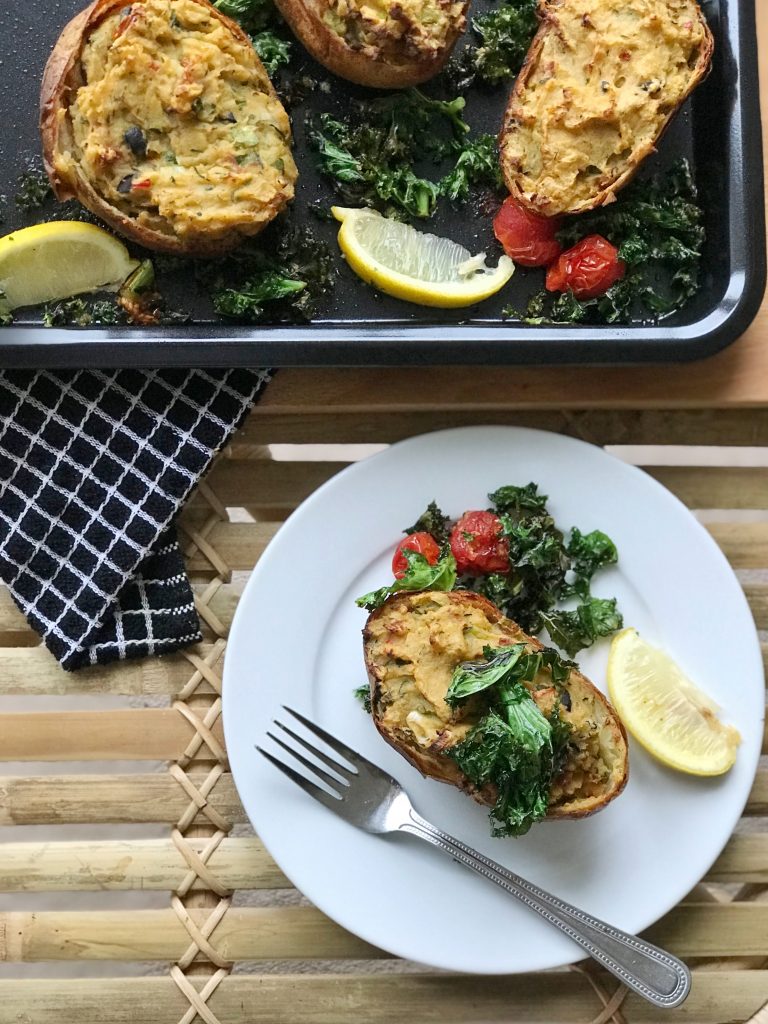 And my favourite dish this week? My vegan twice baked potatoes with courgette and crispy kale recipe.  This, for me, is the perfect Autumn supper. It’s hearty, warming and filling, packed with nourishing vegetables and so flavoursome. Uncomplicated, fuss-free, rustic and delicious.

With twice baked potatoes you keep the crispy, crunchy casing that makes baked potatoes so good, then scoop out the fluffy insides, amp up the flavour by mixing in an array of awesome fillings, stuff the mash back in it’s jacket and bake again until it’s all gorgeously golden. 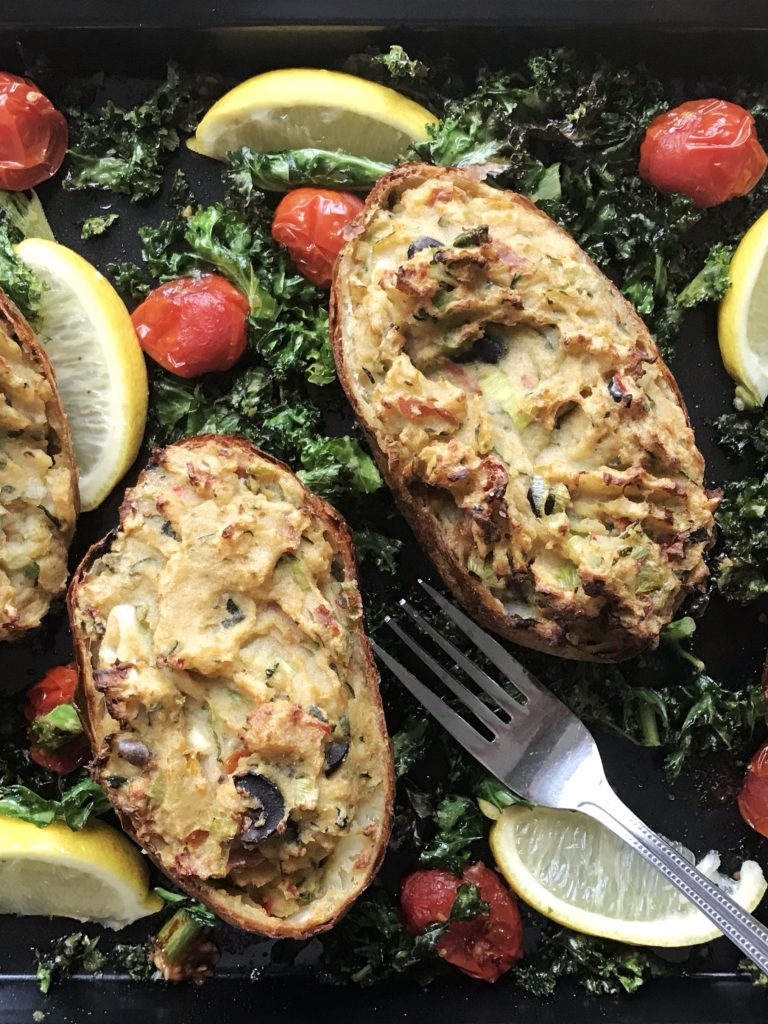 My version eschews the traditional butter, cheese and sour cream laden twice baked potato recipe in favour of a delectable combination of nourishing plant based ingredients. You’ll be astounded by how rich, creamy, flavoursome and satisfying this vegan and gluten free dish is.

I’ve already made this vegan twice baked potatoes recipe three times this week, perfecting the flavour combinations and cooking times, and I’ve eaten it for dinner as many times. But you know what? I’m not in the slightest bit bored with it. I might make it again this weekend. That’s how good I think it is. 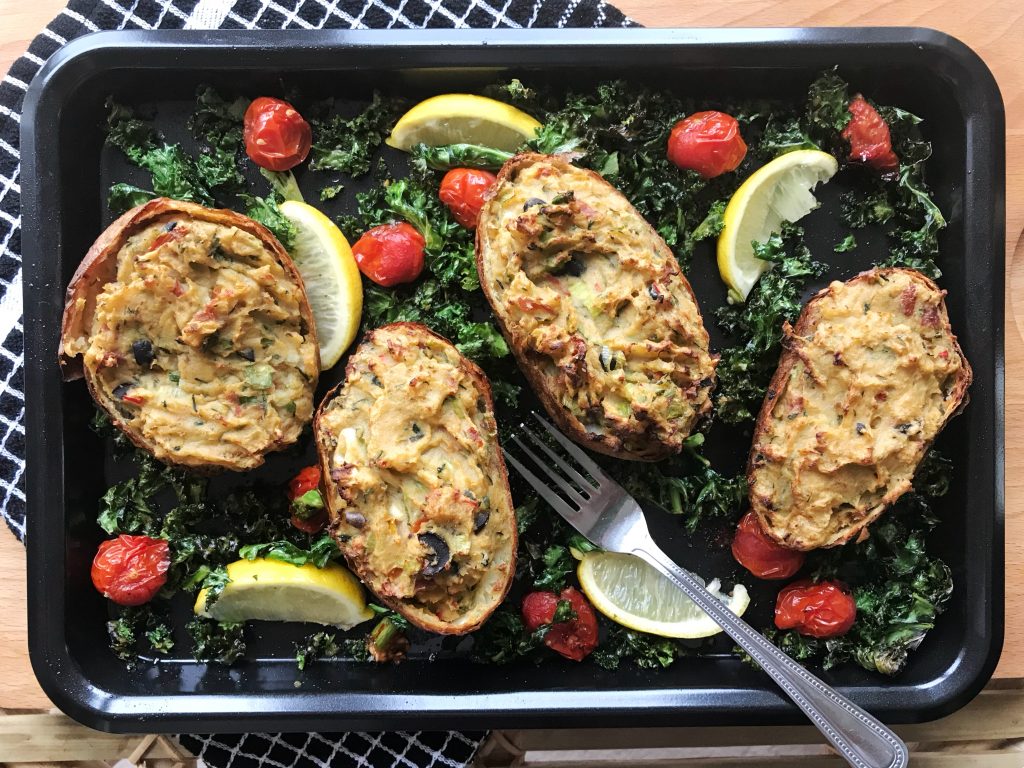 The only ingredient for the vegan twice baked potatoes you may not find in your local food shop is nutritional yeast. You should be able to find this in any health food shop though. You can make the potatoes without it but it does adds an extra depth of flavour that more than makes up for the added effort of hunting it out.

Preheat the oven to 220C/200C fan/gas mark 7. Wash and dry the potatoes then prick a few times with a fork. Rub the potatoes with olive oil and sprinkle with salt.

Put the potatoes in the oven and bake for about 60-90 minutes, depending on the size of the potato. When cooked, the potato should be crisp on the outside but feel soft inside when squeezed.

While the potatoes cook heat 1 tbsp of oil in a large frying pan on a high heat. Add the grated courgette and a pinch of salt. Fry for 8 minutes, stirring regularly, until the courgette is soft with some browned and crispy bits.

Take the pan off the heat and stir in the spring onions, 3 tbsp of the nutritional yeast, sun-dried tomatoes, chilli, olives and a good grinding of black pepper. Set aside until the potatoes are ready.

Remove the potatoes from the oven. When cool enough to handle, cut them in half, scoop the cooked potato out of the jackets in to a bowl, add 2 tbsp almond milk, then mash with a fork. Once you have a smooth mash stir in the cooked courgette mixture. Try the mix and add more seasoning to taste.

Spoon the mixture back in to the potato skins, place on a large baking tray. Use a fork to prick the cherry tomatoes then add these to the baking tray. Return the tray to the oven for 10 minutes.

Remove any tough stems from the kale leaves and tear them in to large pieces. Drop the pieces in to a large bowl then drizzle with olive oil and sprinkle with 1 tbsp of nutritional yeast and a pinch of salt. Use your hands to toss the leaves until they are all well coated.

When the kale is crisp remove the tray from the oven. Slice some lemon wedges to add to the tray so you can squeeze a little lemon over your potato before eating.

If you liked this recipe make sure you sign up here to the Shine newsletter for weekly health and well being inspiration, online yoga classes, recipes and more!

Relax and revitalise on this spectacular yoga retreat in Cornwall 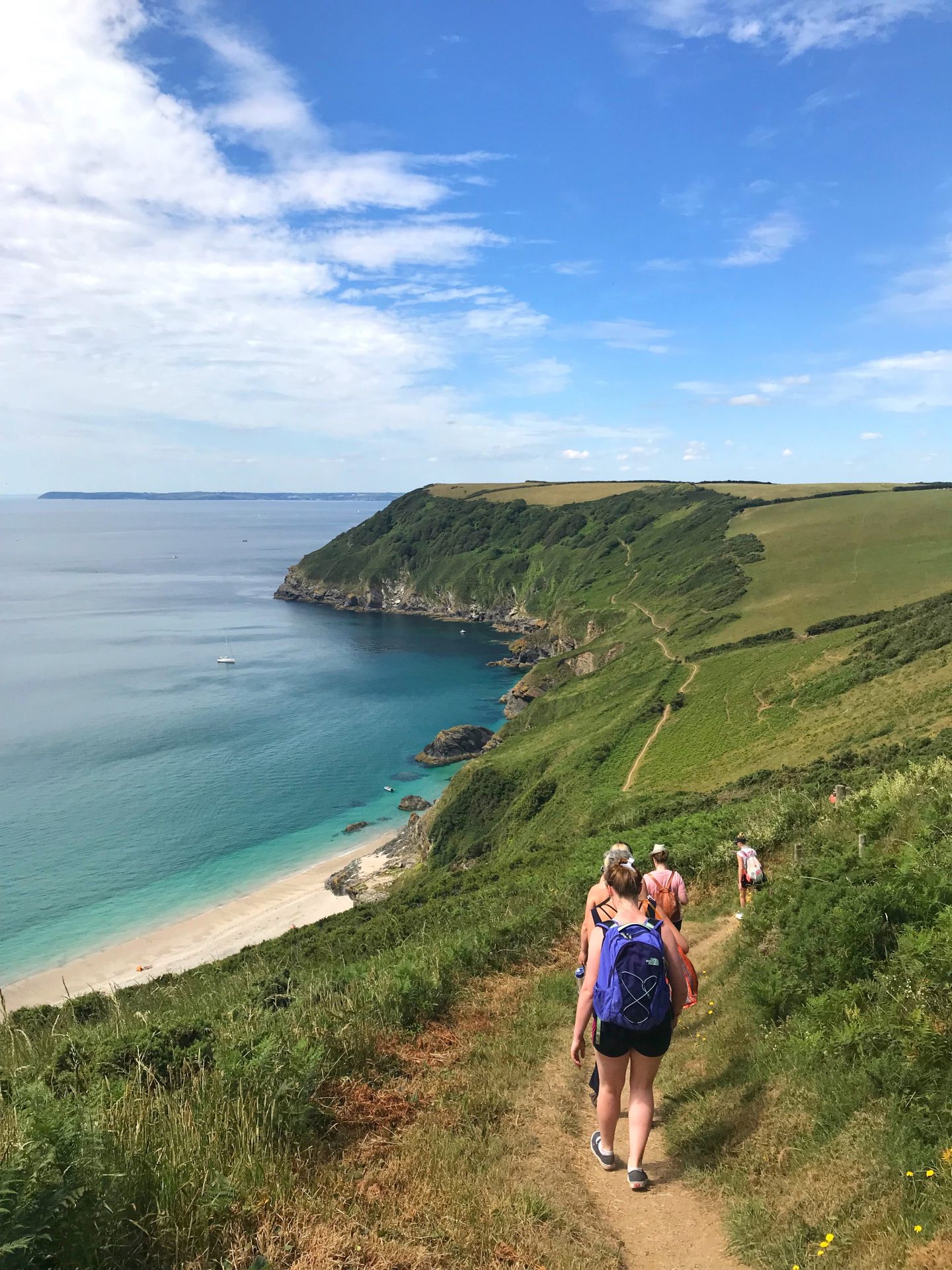